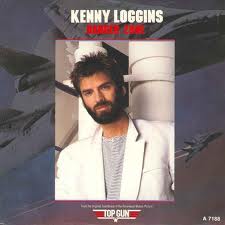 After ZZ Top comes one of the top beards of the 80’s ! Kenny Loggins! I admit I have not a clue about him. It’s your generic tech rock (rock guitars solos and synths) that was abundant in the mid 80’s (just like ZZ Top in fact ! – How did that drummer keep a straight face when it was obviously a drum machine on the record) Giorgio Moroder jointly composed it so there will be quite a bit of technology on it.
This was the less well known song from “Top Gun” and as a bonus you got previous Kenny movie hit “Footloose” as well. Two more album tracks make up the rest of this E.P , “I’m Free (Heaven Helps The Man)” (“Boys of Summer” meets Starship) and “I’m Gonna Do It Right.”