So (ha, ha , ha, ha !) onwards into 1986 and back to the second greatest musical city of Sheffield. From the Fon label and the genre defining Chakk. This was released after the split from the major label MCA (whose advance they used to build the studios with!) A 3 track E.P. that has variations of the song Timebomb. Chopped up drums and samples, so ahead of their time.

From 1986 in this carefully chrono-graphed jaunt through my latest batch of vinyl (with interjections from transatlantic vinyl obsessive, and reason this blog keeps on going- Mike !) So from the small but perfectly formed Amsterdam haul came this beauty. A bit of a lost Japan track for me because it does include Steve Jansen on drums and bits. Haunting, romantic but quite uplifting with a weird backward bass line. Backed by 2 quality instrumental B-sides featuring Karn’s multi-instrumental talents. Still a sad loss.

Next up we have this minor, one-hit wonder from Rah Band released in 1985. Space themed with distinctive, English female vocals, this playful synth pop has a very tongue-in-cheek “Intergalactic operator”. A studio project masterminded by arranger/musician  Richard A. Hewson, his wife Liz provides vocals. A nice couple of mixes occupy the B-sides, the dubby “Super Nova” mix and the stripped back “Solar Horizon” mix. Feel the beat of the Syn Drums!

From 1985 and the now solo Billy MacKenzie helped along by the production of Heaven 17’s Martyn Ware, Greg Walsh and Peter Henderson. This is funky and bombast and heartfelt all in one go. Taking a funky disco guitar link and sprinkling gold dust over the top on crystal keyboards. I think it’s better “Party Fears Two” and “Club Country” put together!! I like the way he did a classy, piano acoustic of the main track as “The Girl That Took Me” showcases THE voice and giving a much more melacholic edge to it. Extra B-side “Perhaps Perhaps” is more synthpop driven by a sequenced bass and really quite Heaven 17. 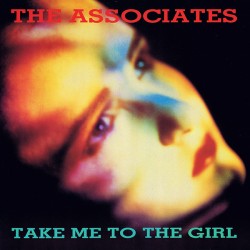 Rare vinyl yet again (nearly £20 on Discogs) from Mike and a track I heard back then but never had. From 1985 and on the famous Factory label a band from Los Angeles. A post punk trio comprising of the stylized voice of Chris Manecke (guitar, keyboards) John Blake (Bass) and Kevin Dolan (Drums) The Factory connection comes with New Order’s Bernard Summner producing it. Weirdly, I prefer the faster B-side which was a great little discovery having been over familiar with the A-side, has a certain New Order feel to it!

Next up we have a slice of jazzy ska from 1984 and from The Special A.K.A. (The Specials without the Fun Boy Three) Falsetto in the house care of Jerry Dammers (Remember indie band Space made a whole career with the vocalist singing in Falsetto) It’s cool and humorous at the same time with some class horn playing. “Can’t Get A Break” is sung by band member, Rhoda Dakar (formerly of the band The Bodysnatchers) with some socially aware lyrics. Both tracks are slightly extended as you’d expect.

So an early release from Mr Duffy in full synthpop mode with this track from 1984. Catchy and very sickly sweet. The M & M Remix is by John Morales and Sergio Munzibia and brings the catchy synth bassline to the front of the mix along  with some intelligently weird lyrics. B-side has a traditional 60’s pop structure, “Push It” with some delicate synth sounds.

(Boo! It seems the “frozen” official video of this is not on the web! Freezing in the Outer Hebrides!)

So into 1984 and one from Mike that a mate of mine had and coveted (There was always a bit of a competition to own rare Ultravox stuff amongst my mates, I think he won!) So this was where Ultravox rocked out here on a limited , clear vinyl!! A new sound and self-produced with heavy axe solos, here with a long remix ( but beware of “oone-oooneeo oonee day” of stuttering Midge there are no actual vocals)So the bassline and synth takes a more forward role and the song is really broken down. The B-side, “Easterly” see’s them experiment with samples and as usual is weird but listenable.

Forgot I was suppose to be doing this chronologically 🙂

So forward to 1983 and the a big, ballsey rocker from Van Halen!!!! (Ha, surprised you!) I had a phase of loving Van Halen and especially enigmatic front man Dave Lee Roth. My old school mate, Mark Killiner thought he was actually him and got me into the band  via their breathtaking debut album, “Van Halen” from 1978. So they went all commercial and embraced the synth for their major hit “Jump” this was building up to it and released just before, off the album , “1984”. Okay some regular followers will hate it, other will nod and acknowledge the wide taste shown on this blog. I still have a bit of room for some classic poodle hair rock in my musical palette. Not even extended or remixed with a couple of album tracks as B-sides. The traditional rock n roll of “Dance The Night Away” from “Van Halen 2” and the more interesting “Girl Gone Bad.” with a great Eddie guitar solo.

Time for some Associates from 1981 and the mesmerizing “Tell Me Easter’s On Friday.” Quite gothy and moody and ever so slightly edited and remixed from the 7″ version and from the album version, “The Fourth Drawer Down” with Mackenzie sounding as insane as ever. Equally weird, semi-instrumental B-side “Straw Towels” rattles along like the Sisters Of Mercy and I think it would of been even better than the A-side if it had more vocals on it , I’m liking the controlled white noise and feedback.