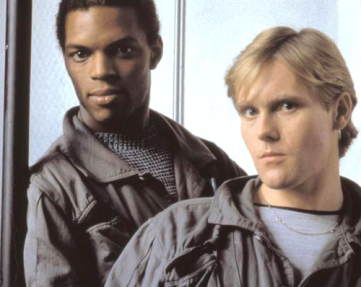 Okay Part 2 of this General Public compilation provided by Mike B. Where we see them going more synthpop mainstream and away from Ska Roots.

From 1986 and a single off their second album, “Hand To Mouth.” So we get the female backing vocals and more synth making them sound a bit like Go West via ABC through a shortcut of Sussodio by Phil Collins. Lots of brass and a catchy chorus remixed by Steve Beltran in L.A with that 80’s big drum sound and handful of similar mixes. 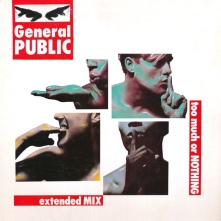 From 1986 and the most sounding like “The Beat” than any of the other stuff. Synth led but it has a definite 2-Tone feel to it. Not sure the synth works it does make it sound cheesy as does the 12″ remix effects but it’s very catchy.  It uses the same sleeve as “Too Much Or Nothing:” obviously the “old” band sound was marketed for the UK audience as it was not released in the US. The extra track is a lively, instrumental track off the film “Ferris Bueller’s Day Off” a lively bit of Ska. 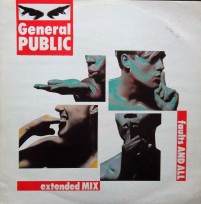 General Public – In Conversation (US 12″)

Using the same production team of Keith Cohen (Engineer) and Steve Beltran remixing the bands self produced track and again from “Hand To Mouth” but released in 1987. More Howard Jones than Howard Jones and very catchy. The “Small Talk” mix is just a dub version. 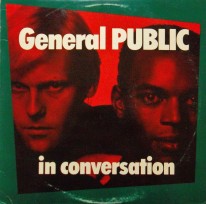 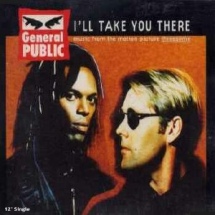 From 1986 and taking Maria Videl’s “Body Rock” as it’s basis, this was a boy band “launch” release. Produced by Ian Levine (Take That producer) and Fiachra Trench it has Euro Disco and Hi NRG written all over it. More Eurovision, this was a boy band, Freddie Stuart, Mark Long, Nick Bowditch and Phil Creswick (who went on to be in Big Fun) Paving the way for Take That and Boyzone. A long mix and the more instrumental “original version” are here. Gay Anthem Time!

You gotta laugh haven’t you, they were from Blackpool! 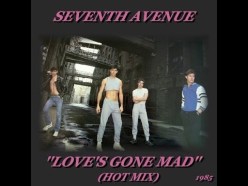 From 1984 and a later release from Elvis Costello and the Attractions, a cover of an old soul classic by Teacher Edition. It has backing vocals by Green Gartside (Scritti Politti) It has a dreamy, synth enhanced backing. Masterly produced by Clive Langer and Alan Winstanley, the 12″ mix works really well, I’d totally forgotten about the track. A bonus is having the theme tune from “Scully” , “Turning The Town Red” as the extra track. Going back to the earlier sound of the band, with witty lyrics and strummed guitar.

Superb vid by the way. 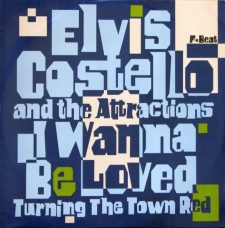 The track was recorded at Pluto Studios in Manchester’s Granby Row (where The Smiths made some demos). Recorded on 24 track 2″ analog through a Trident console. Instruments used included the the revolutionary Roland MC-4B microcomposer, the Roland Jupiter 8 (bassline), the MC-202 (the sequency bits in the verses) and drums from an Oberheim DMX with Lexicon 224XL reverb. The brass bits were sampled and pitched using the AMS sampling digital delay. All cutting edge technology at the time.

Backing vocals were from Jean Barrow, latin percussion from Dave Hassell. Phil Bush was the engineer. Many long and late sessions with crates of beer sent over from the Lass’O’Gowrie. Endless airplay on KFM and Piccadilly Radio. Shambolic and often deafening live performances!

In the vein of many new wave acts of the time, helped with added guitar and the enigmatic Steve Darragh on vocals. It does sound very polished for a independent release. The B-side is quality as well. Chuffed I found this. 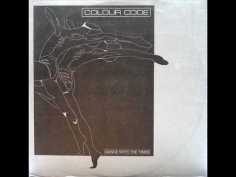 So Mike was obviously a huge General Public fan and so here is the first part of two posts containing 12″ versions of their releases.

So the band themselves came out of the ashes of The Beat (or The English Beat) Dave Wakeling and Ranking Roger and was a bit of a Super Group for it’s time with members of Dexy’s Midnight Runners, The Specials and The Clash joining the party at some point. This 1984 stuff features Steve Jones on guitar.

I have actually got this, buying it because I thought it was something to do with Lyndon’s Public Image Limited (Fooled by the Cover!) More dubby than a dubby thing it ! Plenty of Simmons and a Ska feel to it. An underrated classic. B-side “Dishwasher” is an instrumental and a bit more rockier than the A-side. 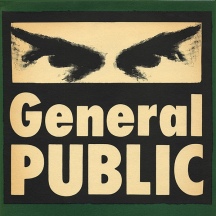 With shades of an energetic Spandau Ballet this is very New Romantic. From 1985 and given a remix by Arthur Baker it funks along nicely with some Baker trademark trickery. The Dub version is excellent as a slice of electro dance, the best dub I’ve heard in ages. Definitely nothing like The Beat! Album track “Day To Day” is given a live outing where The Beat can be heard again and a quality live band. 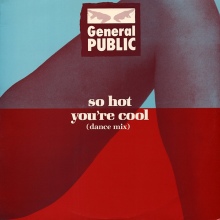 General Public – Tenderness / Never You Done That (US Promo 12″)

From 1985 and their real breakthrough Stateside with this weird mix of influences but with the main influence being POP. The remix was done by Jellybean Benitez and keeps that weird woodwind sample in. I missed this first time around and it was nice to hear it really for the first time. The other mixes have been danced up again by Arthur Baker, with very proto New Order ideas going on here, again the dub mix is where it’s at. (It does sound like a New Order track, weird!) 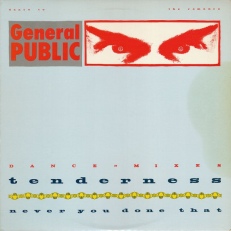 More synth pop from Kids In The Kitchen with this track from 1985 , sounding a bit like (Keep Feeling) Fascination  by The Human League mixed with the chords of Talk Talk “Life Is What You Make It”, add some slap bass, funky guitar, Simmon’s Drums and Girlie Backing vocals and you’ve got it. Co-produced with Thom Panunzio and Mark Berry and mixed by  Ian ‘Mad Dog’ McKenzie the mixes are not all that different. Can’t stop listening to that orchestral beginning though.

I’m sure I had this later release from Germany’s Alphaville up and on here, ah well! So here is an improved recording of the US Promo version which includes the German 7″ and 12″ versions with Martin Gold excellent voice out doing A-ha’s Morten Harket in terms of operatic range. I love the way that it was produced by fellow German eccentric and electronic poineer , Klaus Schulze (ex-Tangerine Dream) The 12″ version is a cracker with some epic classical flourishes mixed with some amazing saxophone playing and heavy guitar riffs, catchy as hell. 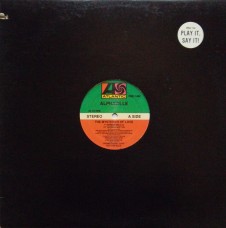 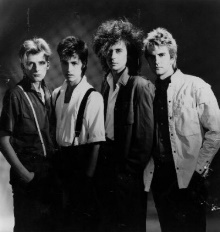 Another obscure US New Wave band that I’d not a clue about. Formed in 1983 and releasing just the one album and a handful of singles. A Drop In The Gray hailed from L.A. and comprised of Scottish guitarist Colin Campbell, singer percussionist/singer Dan Phillips, Hans Christian and Martin Frederiksen (who both became very successful music producers). Coming on like Future Islands with very delicate piano the vocalist sounding like Mike Scott from The Waterboys. “Fall And Cry” has an even bigger chorus and rocky hook, with strident synths and The Alarm rallying call vocals. 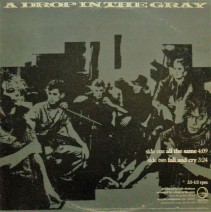 So more Aussie New Wave from Mike B and I’ve not a clue about them but it was nice to be introduced to an old/new band. So this included the band line up of vocalist Ron Martini, guitarists Chris Langford and Les Barker (ex-Benders), drummer Ian Morrison, Martin Fisher (keyboads) and Peter Leslie (bass) Produced by respected producer Peter McIan (Men At Work, Mr Mister) we do get that mid-80’s sound, electronic drums, memorable chorus and spiky guitars. (Just a great song) 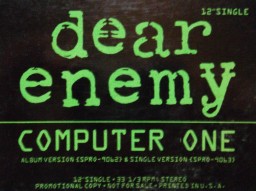 So from 1983 and something from The “English” Beat, as they were called overseas. Bizarrely remixed by John “Jellybean” Benitez but don’t expect drum machines or synths just some good old dub effects (Phew!) One of their later efforts and an obvious attempt to make 2-Tone invasion of America, “Mirror In the Bathroom” had done the business a year before. More traditional ska is on the B-side with accordion tinged “Jeanette” ever so slightly extended.