In the UK in the 80’s I was unfamiliar with Berlin, until the doomy “Take My Breath Away” This also appeared in a film, “Vision Quest.”

This, their biggest Hit,  was released in February 1984 was produced by Giorgio Moroder and Richard Zito and is very similar to Debbie Harry’s “Rush Rush” also on here and re-upped.

The remixes were both done by Moroder who synths the tracks up even more and brings in more dance beats.

Prefer the signature tune “Dancing In Berlin”, very quick with bass sequencers and a bit of a guitar and fretless bass. 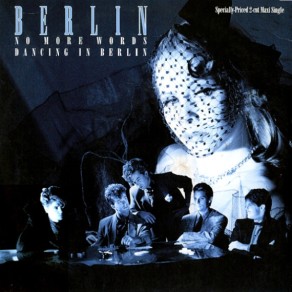