So this 90’s stuff that I’m putting it up is as popular as a fart in a lift. Sod that it’s my blog and I’m feeling subversive.

Harsh techno, no compromise. The debut release from Pressure Of Speech and released on the indie label North South in 1994. Comprising of duo Luke Losey (who did it a bit of work with Orbital) and Mickey Mann (who worked with The Shamen as well as System 7 and Orbital) They had close links with the DIY soundsystem and rave organisers, Spiral Tribe. On “Swarm” you get dense, industrial sound layers, detuned synths over jittering beats and crashing snares. “Elone” builds and builds in hypnotic and tribal fury remixed by Mark Gage (as Vapour Space) 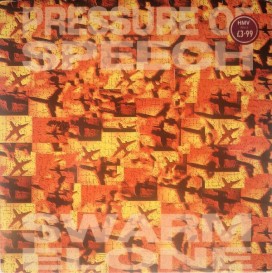