As we approach the 90’s there started a bit of trend for re-releasing a bunch of early 80’s tracks and given them a bit of a polish up, a definite cash in from the record companies, infuriating for fans but of interest to the casual listener.

This update by The Style Council improves it, cleaning up and sharpening the sounds whilst keeping the chilled, laidback groove. This was released to promote the compilation “The Singular Adventures Of The Style Council” Putting up today is probably wishful thinking considering the shitty weather at the moment.

The B-side had a couple of new mixes of a new track, “Everybody’s On The Run” off their final album “Modernism: A New Decade”. Tapping into early house music, the Norman Jay gives us classic jazzy house on Version 2, with a trumpet and organ solo.  Version 1 by Freddy Bastone gets a bit of a space funk groove going going into Gospel house thanks to Brian J Powell’s soulful vocals. Now where is that bloody sun? 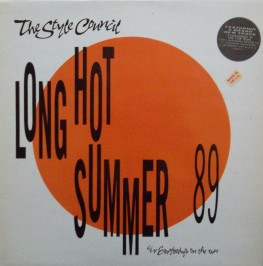