Scouse synthpop from 1985 and a 12″ isn’t even listed on Discogs! Freeze Frame were the duo of vocalist Steve Byrne and guitarist ‘n synth player, Ronnie Scott and Clive “G” on more keyboards. They released half a dozen singles from 1981 till this one in ’85. This seems to be revamp of their first single, given three different styles or using the theme of touch, bewildering. They were co-produced by Gil Norton and Dave Bascombe has a had in “Personal Touch” all weirdly experimental,with the vocals speeded and treated to make them sound female! “Personal Touch” bring guitars to the mix in a stadium rock, Simple Minds style anthem. “Girl” is a gentler electronic ballad whilst all the bells and whistles are on “Re-Touch” sounding very OMD! 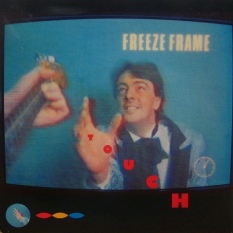