David Bowie for people of a certain age, kids of the 80’s, was a constant icon, that was always around, in the background during that period. Loads of older kids said we had missed his best stuff in the 70’s, “when he was good” and loads of my friends went back and embraced his early albums. I disagree that the 70’s was his golden years, half fueled by nostalgia and probably parents own record collections, they were very, very good but he was much more than a 70’s icon that kind of hung around. Bowie always reinvented himself and turned his hand to new styles and directions. In the 80’s he did his biggest concerts and had the most global success. I loved his new stuff (Blackstar is really worth a listen) and felt that even in the 90’s he had something to say. This has been my favourite track for a while off the “Earthling” album.

Mike was quick to contact me and share some of these rare mixes of a favourite track, “Golden Years” -He had many golden years, a legend has left the building.

So from CD, which was released in 2011, the notes read

All the mixes are quite laidback and respectful to the original with each DJ adding their own twist, even into reggae!

(Update -And the bloody links, my head was screwed yesterday!) 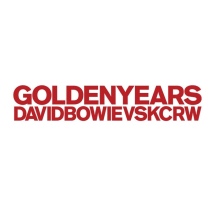