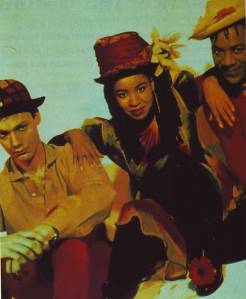 I’m Back! Thanks everyone who posted words of thanks and encouragement.

Keeping with some early 90’s Dance stuff (I try to cater for all tastes on here) with producer William Orbit’s Bassomatic and their last single release, the band then included vocalist Sindy Finn who replaced Susan Musgrave and rapper MC Inna One Step. However on this final release rap collective Sound of Sha’bass, take the main credits. They were Glory B, Divine and Cesare. The latter being Cesare Marcher, Italian-British DJ who was involved with the early Stereo MC’s releases. Again the Orbit was joined by Mark Rutherford and Sugar J (John Gosling a.k.a Mekon) in the studio to produce this soulful and funky little number. B-side “Attack Of….” is a blinding slice of beat driven house, layered and loop beats and a phat bass, remixed by Matt Clark.